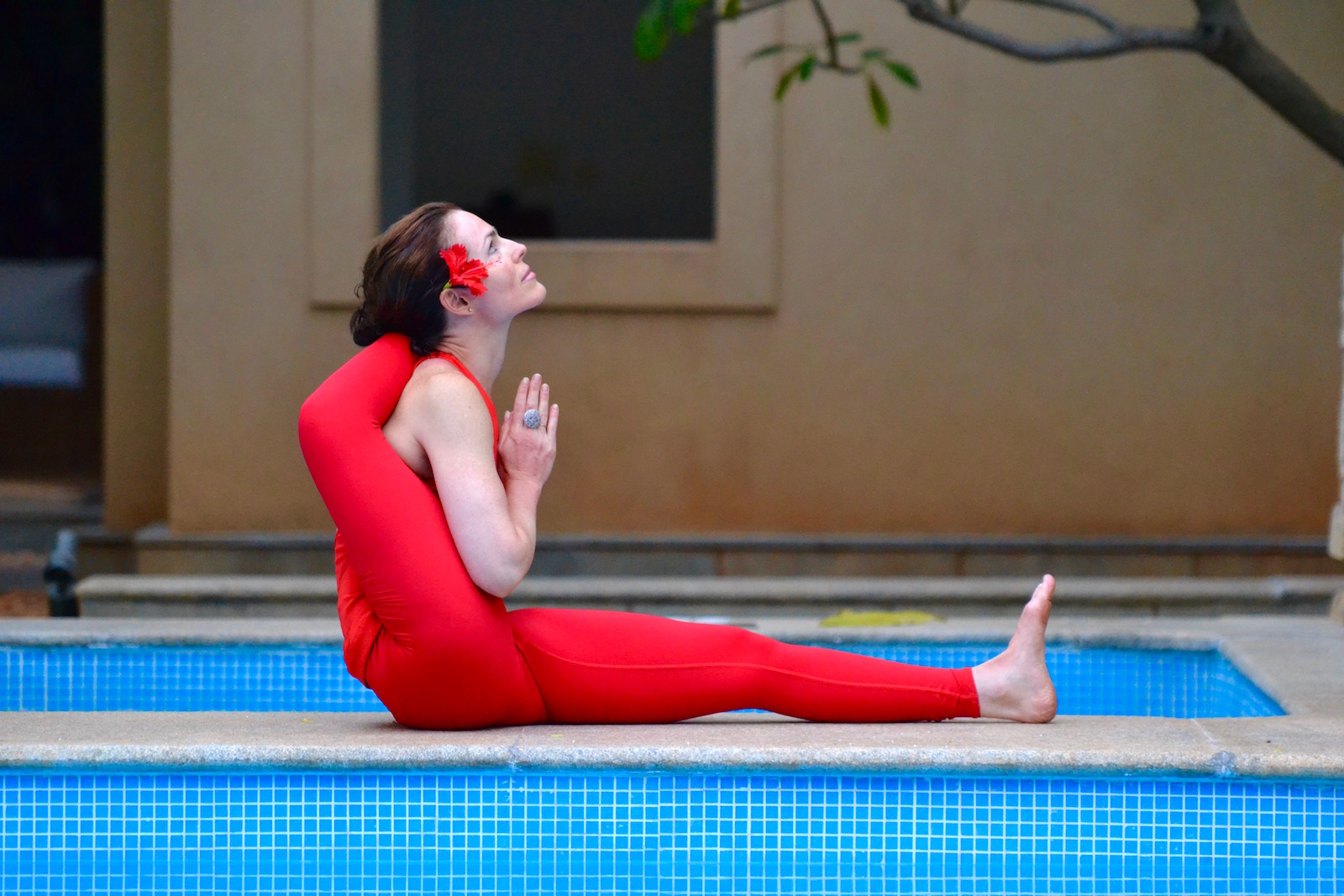 The Path to Dipa Ma

When I began reading about the paths of many meditation teachers I came across the work and life of Sharon Salzberg. In her biography, she named her first teacher as being Dipa Ma. She explained how she had such a  deep feeling of being loved by her. During one of her early trips to India, Dipa Ma had asked her,

I was so touched by this it made me feel teary-eyed.  The way Sharon depicted Dipa Ma was as if she was asking you these questions. Of course, when I shared the story to my yoga students during a meditation class one of them did not appreciate the reverie. He remarked, “My own doctor asks me the same thing.” Now, I can only speak for myself but my doctor appointments are fairly routine. I do not recall my doctor ever asking me if I was happy.

It was this description of Dipa Ma that served as the impetus to learn more. I decided I too should get to the real source by visiting Dipa Ma’s daughter, Dipa who was living in Kolkata at that time.

By then,  it was my 11th trip to India and I had always told myself travelling within India did not include Kolkata. I had heard Kolkata was worse than Mumbai with respect to violence against women and congestion.  I knew of a female yoga student who had been sexually assaulted in the street. These were pretty good reasons not to go, but I felt I would need to overcome these fears and find a way to travel there as safely as possible.

What intrigued me the most about Dipa Ma was that she was a rare and special woman known to have reached several stages of enlightenment and at the same time, a very ordinary woman.  More importantly, she studied and practiced meditation during a time when women were openly discouraged for doing so. Despite this, she developed incredible insights and knowledge. She had also experienced many hardships including the death of her husband and a child as well as a severe illness. But it was these painful events that gave her the motivation to practice not crumble.

For me, planning this trip was like a game of snakes and ladders.  It was not as if Dipa was readily available. I had to hunt around to find out where she was living; whether or not she was still in Kolkata and how to get there. The most obvious place to start was with Sharon Salzberg. She suggested I write to the director of the Insight Meditation Center who suggested I contact one of the administrators, who suggested I contact one of the teachers, who felt I might get a hold of one of their students who then believed Dipa’s son could be helpful. That is, if he could be reached.

Finally, I got in touch with Rishi, Dipa Ma’s grandson by email and I waited eagerly for a reply. I received a telephone number and the directions to Dipa’s home (the same house where Dipa Ma resided and taught many Westerners).  I was not there yet but being met with unexpected warmth.  She too, I was told, was looking forward to meeting me.

Fast-forward and I am at the airport waiting to check-in.

Getting to India had involved flying to Delhi with two lay-overs and a total of seventeen hours of flying from Toronto. I rested at the Maidens Hotel (a beautiful heritage hotel) for about five hours only. The next evening I left for the train station to embark on the same number of hours of travel but by train into Kolkata.

Notwithstanding the fact that Kolkata is a dirty and ridiculously overcrowded city it is also the city of lovers, poets, mystics and great saints. I concentrated on these attributes while staring at the wilted rose I received upon boarding the train in First Class. Despite being in the higher class, I dined on corn flakes at breakfast and a cutlet for dinner. It was the toast with a spot of mould that was the most off-putting.

As for Kolkata, I can understand how most people probably don’t consider the city a spiritual hub, but many saints and enlightened Yogis have made it their home. Mother Theresa, Swami Vivekananda and Ramakrishna lived and worked there for several years. Ramakrishna, the Guru to Vivekananda, spent 16 years at the Dakshineswar temple. In this temple, there are 13 inner cells dedicated to Lord Shiva and an inner one to Kali (the black goddess). Unlike most temples throughout India non-Hindus can enter the inner sanctum. The temple is situated near the Ganges where Ramakrishna is said to have experienced spiritual visions that included uniting all religions and entering Samadhi trances. Some scholars claimed he was a mad-man but spiritual followers understand he was a rare, enlightened soul.

By the time, I settled into the hotel in Kolkata and called Dipa it was early evening. I was not sure what to expect but our conversation was so natural as I heard a soft and tender-hearted voice on the other side of the phone. Not long into the conversation she asked if I would stay for lunch.

On the following morning, I made my way to see Dipa through Kolkata’s downpour. It rained the whole day and because of this I was over an hour late.  When I called Dipa to tell her I would be late she misunderstood and thought I was not coming.

When I finally arrived at our meeting place, Dipa had been waiting in the rain at a subway station outside of her apartment. Just thinking about it makes me want to cry. What a humble, patient woman. 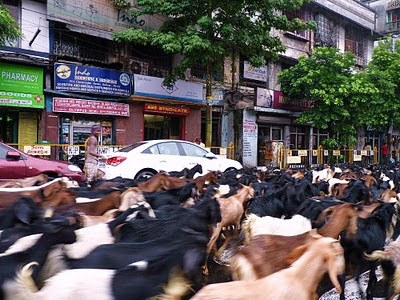 At the time of writing, Dipa still resided in the same home where her mother Dipa Ma lived. Her home was beautiful (just as many of the students had described it as being). We sat in the same room where Dipa Ma had greeted several foreigners and gave her blessing. Many students who visited often described the room as small, but with an incredible feeling of lightness and space. 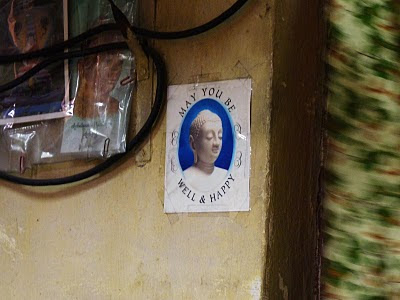 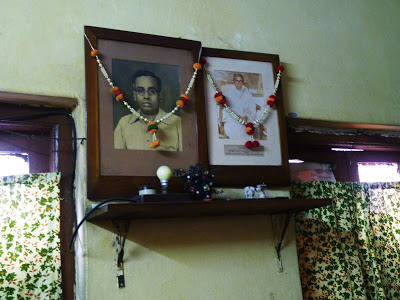 Certainly for some, her home would not be seen as comfortable. The cramped quarters, cut-out rooms, clutter and general disarray of things and yet, it had a big heart. There was an extremely easy feeling of calm and peace. Several pictures of her family members, monks, teachers and the Buddha adorned the once white-now-yellowish painted walls. It was so ordinary that anyone looking inside could easily turn their nose and think, “Nothing special.”  Like the way tourists see the poverty and busy streets of India, but tend to miss its spiritual heart.

There is a lot to say about my visit with Dipa. But the most important part is with an exceptionally kind woman. After serving lunch, Dipa offered her bed to take a nap and began talking about her mother in a gentle and caring way.

She expressed, “I lost a gem in my mother.  My only friend.”

At this she began to weep, which took us both by surprise. Dipa didn’t seem like the type to cry easily. And I felt helpless as I tried to understand her loss. Death and particularly that of a mother are both personal and private matters. I do not think anyone can rightfully say they understand. And frankly speaking, it cannot be another way.

After I met Dipa it felt so right. She is a small woman physically, but a strong one internally. As a gift, she gave me a photograph of Dipa Ma. She told me she had taken it to a photoshop to have it enlarged. I was overjoyed and touched. The photo is of Dipa Ma during a trip to the United States. She is standing dressed in a white sari and wearing black socks.

In the Life and Legacy of a Buddhist Master one of Dipa Ma´s student tells the story of having given Dipa Ma a pair of socks. These are the same ones she is wearing in the photo.  But when Dipa returned to India she left them folded neatly on the bed. Her student was shocked by this as the socks were a gift. However, it showed the way Dipa did not believe anything belonged to her. She did not take anything for granted or make assumptions.

When Dipa handed me the photograph she told me,

“You put it in your meditation room and mother is there. She is your mother as she was a mother to all.”

When we left Dipa walked me back to the driver who was waiting. Even despite the busy traffic, Dipa stood out like a light amongst it all. She waved good-bye and gently said, “I will miss you.”

For while Dipa had never met me before,  she was unreserved in her feelings and gestures. Her words were exactly like those of a mother when we parted. 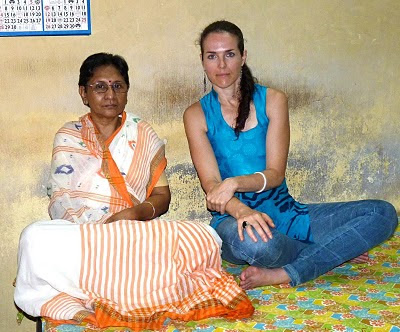 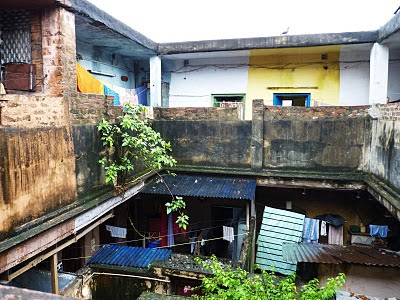 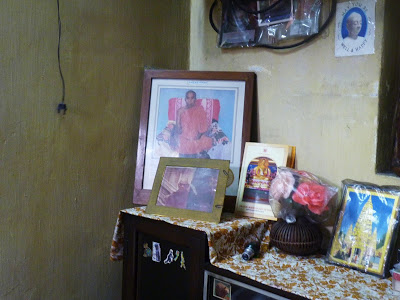 As we said good-bye, I took a few steps away and looked back. It was as if she knew I would and waved again. I tried to memorize the fleeting moment of saying good-bye as I climbed into the taxi. The lights changed, the traffic moved and Dipa disappeared like a mirage.

Riding the train back into Delhi, I experienced the same routine but in reverse.  The wilted rose, the cutlet for dinner and the corn flakes at breakfast. But my mind remained with Dipa; lulling over the visit and the path to Dipa Ma.

Lunch, tea, cookies, rest and saying good-bye. Perhaps an example of the way each day can be lived.  Simple. 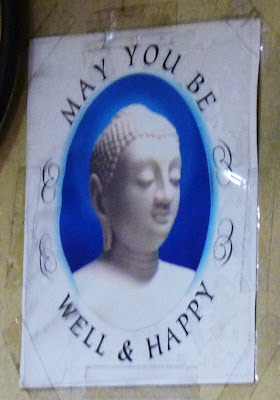 Translated into Chinese by MBSC (a branch of Panditarama Meditation Center of Burma).